This was originally published on The Latest Pull, a comics focused website in 2015

After three excellent and chilling issues the final pieces have been set for the upcoming climax of the first story arc of Scott Snyder and Jock’s “Wytches.” With the previous issue lifting the hood on the inner workings of the concerned father Charlie, this issue begins to dig deeper and at times push back against what the reader has so far presumed about the character. With a brilliant use of juxtaposition, Scott Snyder has presented us with two stories of Charlie, one of the man he was and one that fully moves the character forward into the gaping maw that is the “Wytches” mythology.

This is a book that rewards the reader who rereads and remembers well the previous issues. This issue is littered with returning symbols, references and hinted at plot points from earlier on. The story has moved forward in a big way with a major reward for reading thus far. One challenge that a major reveal issue faces, especially in horror, is the prospect of the secret being uneventful, underwhelming, and not scary. So far what has kept this series scary is the slow reveal of how the world of “Wytches” works by disturbing and cryptic encounters with scary characters. This time however, we’ve been given quite a bit of an explanation that leaves the reader with a clearer image of how the pledge system works without ruining the mystique of the wytches themselves. What are wytches and what does it mean to be “pledged?” The reader leaves this issue with a working knowledge of these concepts without completely revealing the man behind the curtain.

Scott Snyder steers the ship away from the rocky shores of exposition and unsubstantiated detail by offering a juxtaposed story, as has been the case for the series so far. The narrative progression of each compliments the character development as Charlie fully accepts the “call to adventure” and resolves to move past his own fear and newly revealed past to rescue his daughter.

Jock’s art continues to amaze. Only a talent as immense as his can bring to life not only the characters and world of “Wytches,” but can also use the visual medium to unnerve the reader. During scenes of dialogue that could have been bland are images that throw comic art at its footing. There are very few straight 90 degree box panels in this issue, and as the issue intensifies, the jarring slanting of traditional square panels turn the page into a twisted collage. 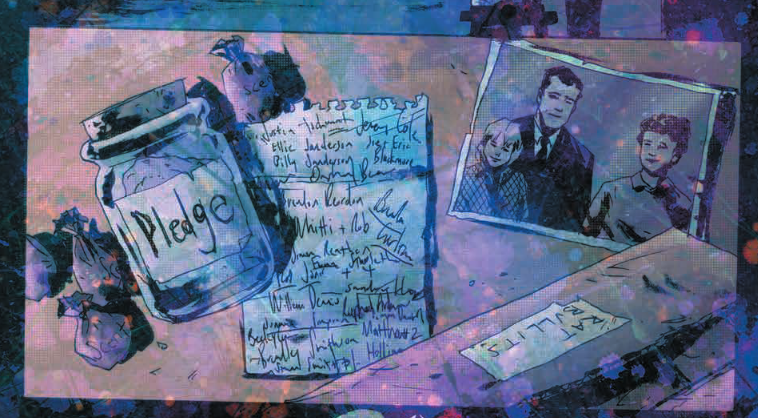 “Wytches” is easily one of the best contemporary horror comic book series out now, written and drawn by two massive talents whose names command respect and sales in the industry today. This issue is a must read for anyone who likes horror, and the story content makes it as new reader friendly as the first issue.

Check out some groovy doom influenced metal, all their albums and merch have great art as well.

I'm a tea enthusiast, podcaster, graduated from the Frankfurt School of Cultural Marxism and Wizardry. I write about tea and media with an interest in the ideological content in media and structural analysis. View all posts by Barry

This is the official website for I’m Not An Expert But… a media analysis podcast hosted by Barry Donnelly and Clay Jackson. Barry might post written reviews of whatever he feels like because no one can stop me.

If you know how to use RSS here is the feed for the audio show. https://simplecast.com/s/ff2d1596

Clay declined a funny blurb so I get to write one: Clay Jackson has the power to platinum any video game using the powers of veggie burgers and superior genetics crafted by people from the future who wanted to make a person to send back in time lead humanity to the path of owning a pug and buying a single chicken nugget at Wendy’s and arguing that 4.99 / 5 is .99 cents plus tax. In the future these are important values they want us 21st century cavemen to learn. They should have cast him as Superman in Man of Steel, it would be amazing. Take notes.